I’m taking a break from posting till next year. Then I’ll be back full force. Enjoy whatever holiday you enjoy! 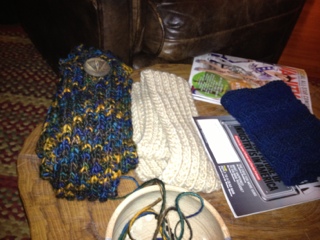 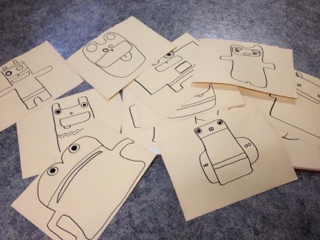 After messing around with images, I came up with some that I was satisfied with. I got some input from my kids and picked the owl (bottom right) and the Villain (top right) as my top contenders.
When I got to the class there was a good hour that felt like nails on the chalk board to me, if I’m being honest and I guess I am.
I hadn’t realized that I needed to bring the images in digital format.  Neither had anyone else (There were four of us) since that information wasn’t actually shared with us.  So the instructor had to run around helping us get the images the way they needed to be.  For me, this entailed scanning and Photoshopping to get something that would work.  I didn’t take any photographs at this point.  I was busy gnashing my teeth. 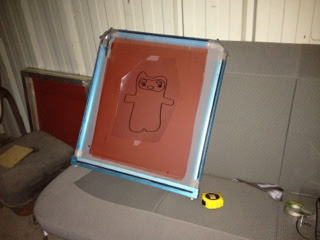 So, you’ll just have to take my word for it that it brought us to this.  We got our images figured out and then printed them onto a transparency sheet which we then taped to a screen that had been coated with a photo emulsion – the red stuff.  I know, I’m sorry. I skipped over much of the fun part there.
This is the part when I started to relax again. 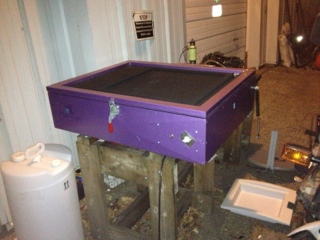 The screen got placed in here.  It’s a light box.  The top is fabric and has a vacuum dealy that sucks the air out so that the screen is pressed snugly up against the light.
After three minutes of light exposure, we pulled our screens out.   The red stuff that was exposed to the light hardened.  The areas that were covered (by the lines of the image) hadn’t. 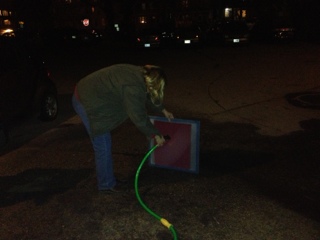 The parts that hadn’t hardened washed right out with water.  That left us with with a cool stencil that will last for up to 1000 prints. 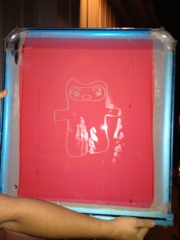 Here he is right after his bath 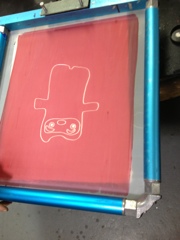 And here he’s all dry and upside down so that the stuffing is running to his head. 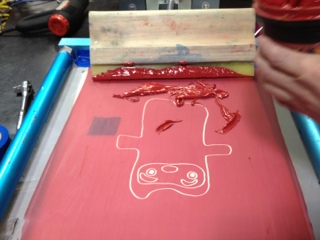 Moving right along.  He was clamped down over my fabric and ink was plopped by his feet. 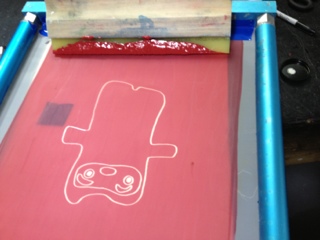 Taking the squeegee, I pulled the ink over him several times. 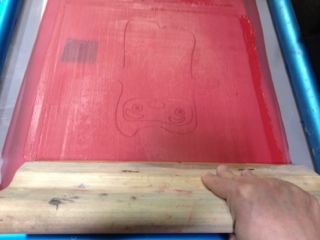 It was a little hard on the hands. 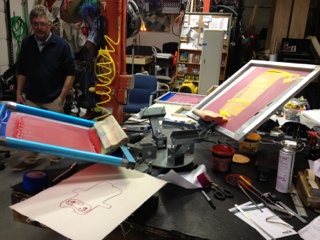 The screen was hooked up to this crazy contraption.  It’s like a lazy Susan with four clamps.  What was great about it was that you could pick the screen up and check the image and know that the screen would return to exactly where it had been if you needed to squeegee again.  Which I always did. 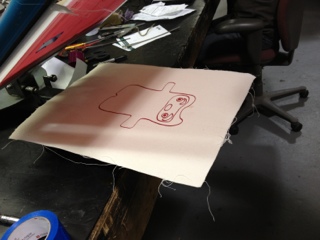 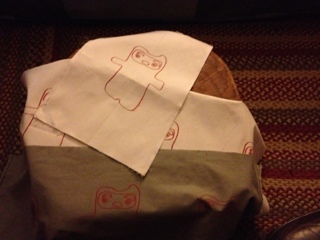 The very nice instructor said I could make as many as I wanted and I, of course, had brought an excessive amount of fabric.  I made eight villains but exactly at 11 (2 hours after the class was supposed to end) I turned into a pumpkin and all but ran out the door to get home to bed.  Of course, having run out so quickly, I left my phone (After annoyingly taking so many pictures with it) and had to turn around and go back to get it again.  You just do not leave a phone at a hacker space overnight. 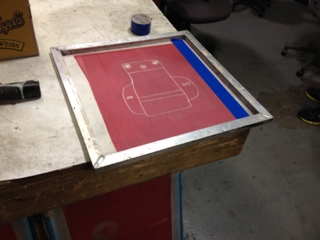 I did also make a screen of the owl.  The instructor said I could take this one home (The villain was on screen he used more often so he needed it back) to use.  I didn’t print any owls that night but this screen is in my garage awaiting my attention.

It was a rough start but I would totally take the class again.  I learned so much and the instructor was great.  I think I’ll make some tote bags and pillows with my screened images since I made them on canvas.  I’m kinda tempted to open my etsy shop again and try to sell them.  We’ll see.  Even typing that out makes me cringe a bit.

But I’m a junky for learning how to do new stuff!

Like Loading...
Category: Dyes
Tags: critters, Junky for Learning, process, project, Screen Print, sewing
On Thursday night, I took a screen printing class at Sector67.  I was supposed to show up with an image ready to print so I spent a little time on Wednesday and Thursday coming up with something.  I’m not used to doodling in a way that leads to something concrete so it was a new experience for me. 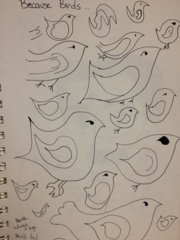 My first instinct was to draw a bird, but I coudn’t get this out of my head.
Damn you Portlandia! 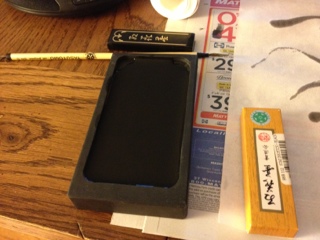 So, I dragged out my inkstone, ink and brushes to play with and see if I came up with any ideas.
But, even with this great company, after ten minutes of mixing ink, it was immediately obvious when I put the brush to paper that this was not the right medium for screen printing. At least not for my very first time.

They are fine, I guess, but birds and squiggles?  I really wasn’t sure how that would translate to the screen print since I had no experience with it.  I wanted something super simple. 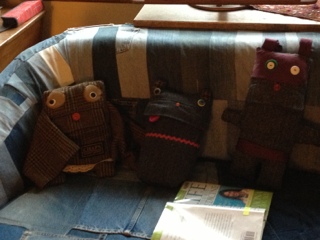 I looked up and saw that I had even more company than I realized, these guys were all lined up on the couch, almost as if they were posing. 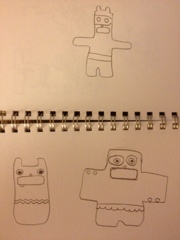 Check it out!  They were totally posing.

I also went back through my old blog posts and found some other critters to draw.  I was really happy with the combination of simplicity with personality.  I stumbled upon my images.  Next time, actually screen printing process pictures.  I realize that a post about coming up with a doodle may not be the most interesting thing to people who have done it before but it’s new to me, so thanks for humoring me.  🙂

Like Loading...
Category: Dyes
Tags: critters, display, process, project, Screen Print, woollies
I made this necklace last week and wrote a whole blog post about it using my phone.  Then I deleted it by mistake and spent a shocked 30 seconds realizing the implications of phones not having “ctl z”.
I don’t think I’ll use the phone to blog again. 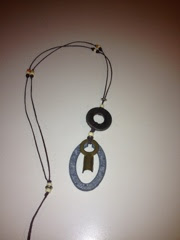 Anyhoo – Last week a friend and I ran a jewelery making workshop at the library.  The idea was to use old jewelry and hardware to make new creations but almost everybody skipped the hardware.  That’s my favorite part!  But, whatever works for people, works for people.
I used to make and sell my jewelry but have gotten distracted by how many other really fun things there are to make in this world; it was a kick to make some again.
In fact, the workshop was so popular that we all decided to do it again in January. It’s not up on the web site yet but when it is I’ll post a link.
Tomorrow, I am taking a screen printing class.  I’m supposed to bring in a simple image to use and have been pondering and pondering.  So much fun to do, I do love the ponder.
So, today I think I’ll try to make something.  I’m tempted to pull out my ink stone and calligraphy brushes but I’m not sure how that’ll translate to screen print.  Then again, I’m all about the “only way to find out is to try it” theory.
Yes, I feel it, the time to make a mess is upon me…again.