I’ve had better ideas…but I’ve also had waaaay worse ones.*   My big idea: Dye with indigo in my house.  I’ll just say this part again: In my house.  If you’ve never dyed with indigo, you may not know that it stinks like WHOA!

Way back in the day, dyers used yeast and fermented urine to get the dye to affix to the fabric.  I don’t, by the way.  But I do use chemicals that smell like ammonia (the secret sauce in the fermented urine of old).

Dyeing outside it not really an option right now.  Indigo likes to be warm.  It doesn’t require boiling like most natural dyes but It does not like to be cold.  Neither do I.  Wisconsin in November:  Cold.  So is December, January, February, most, if not all, of March and much of April.  That gives me a veeeerrrrrry long wait before I get to play with indigo outdoors again. So, I decided to brave the mess and stench.

To conquer the mess I bought two kiddie pools.  Finding kiddie pools in Wisconsin was an adventure of it’s own.  There was nothing available locally (Wisconsin in November, need I say more?) The first ones I found online were about $10 plus $80 shipping.  If I’m being honest, this whack-a-doodle pricing was a big motivator for me and may well be the reason I went past the “just wondering” phase of this idea.  $90 for two kiddie pools? Ahahahahahahahahaha! I can do better!

This required much googling, which I love doing.  I did finally find some reasonably priced options.  Thank you Toys R Us and the fact that you ship everything everywhere everyday anyway.  Buying those pools meant I was committed; see how the falling down the rabbit hole works?

Also to tame the mess, a tarp.  The tarp doesn’t really have a good back story…it’s just a tarp.  Eventually, I added a couple of towels around the edges to wipe my shoes on before leaving tarp-landia.

Totally worked.   The indigo was very happy in the house.  The vats woke up easily and dyed the fabric really nicely.

But the stink…I had a fan blowing and the door to the outside opened but THE STINK!!!

Because of the stink, t’s not something I would do again real soon but I’m pretty sure I’ll change my mind before April.  Spring is soooooooooo far away.

* I am thankful everyday that there was no Facebook when I was in my early 20’s.

Sometimes I find it hard to make time to make art.  Since I work part time and I do get quiet time to myself in the mornings, I realize it isn’t really my schedule that is getting in my way.  It’s totally that repelling magnet thing between the chair and my ass that happens when I try to sit down and work.

So I decided to go google the question.  You can always google a question.  I had plans to find a bunch of good advice in different places and, sharing links to the original articles, post the ones that spoke to me the most here.

HOWEVER, I stumbled on this article by Rice Freeman-Zachery: 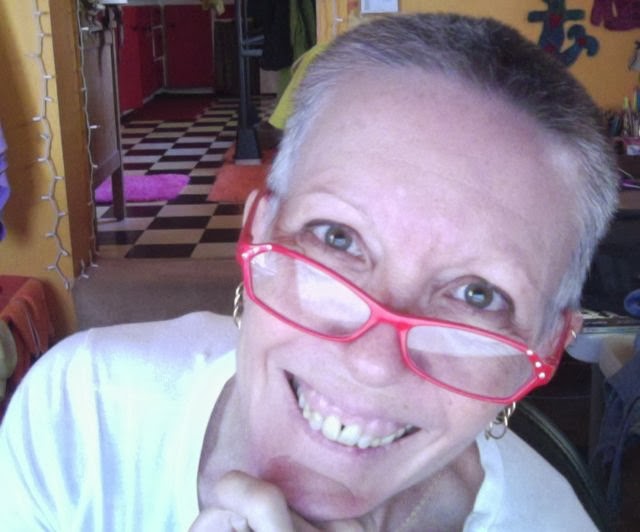 and I’m just going to stop searching right now and shut this time sucking machine away and go play with my kitchen implements.

I made a couple of new books this week.  They’e different but both pretty awesome.

The one on the left is bound using the Coptic Stitch and on the one on the right I used a piano hinge binding.

Coptic stitch is pretty and tidy. 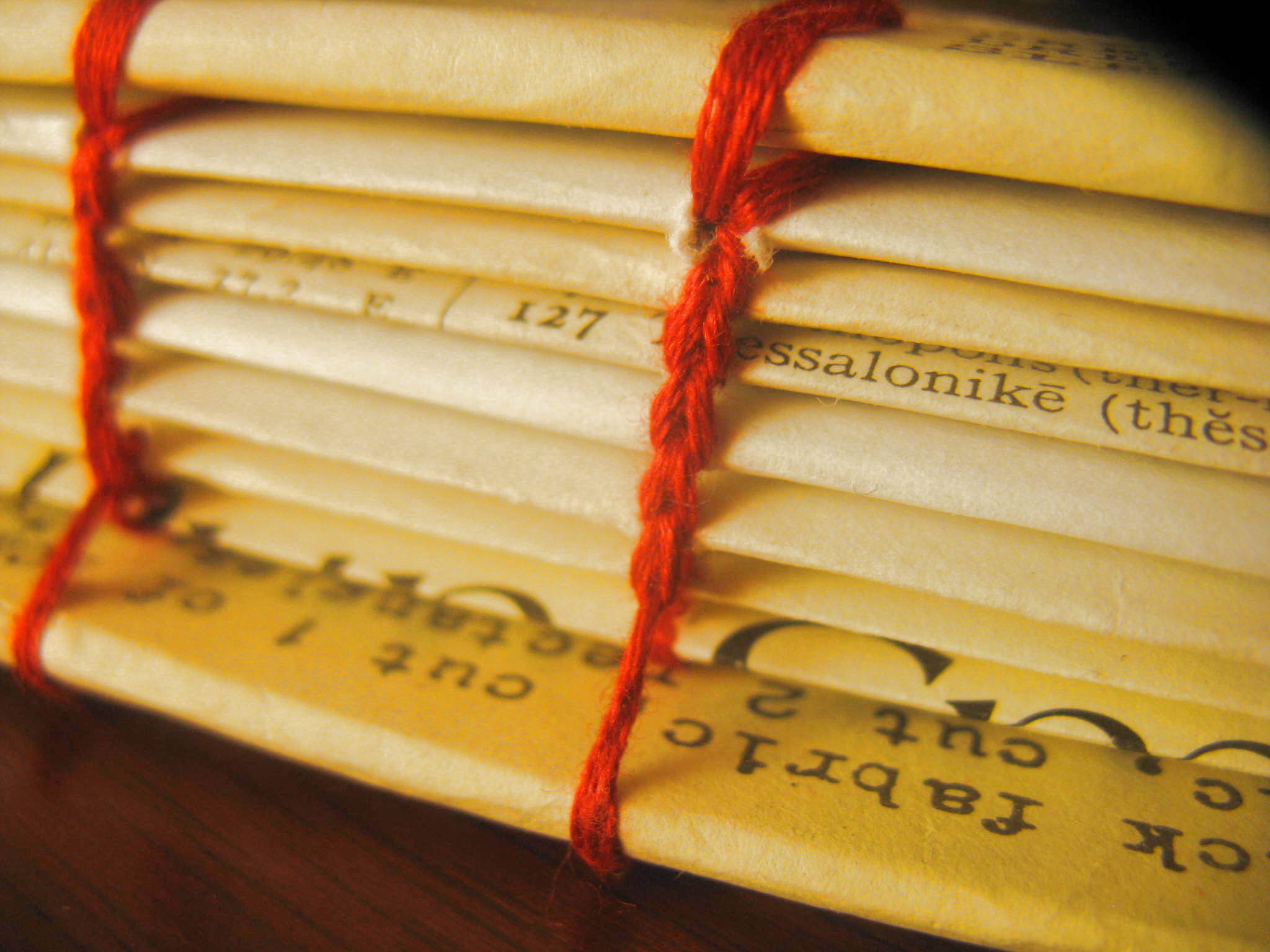 It also makes this really gorgeous braid that looks like knitting.

One of the best things about it is that it opens flat so it’s great for making art or writing in.

The piano hinge binding, at least the way I make it, is a fabulous chaotic mess.

I used ribbon and skewers and embroidery floss.  I let the strings hang out!

Piano hinge also opens flat.  I think I require that in a handmade book.

They also play well together.  I’d say they both win, but since they aren’t actually competing for anything, that makes no sense.  Didn’t stop me from saying it though.

How cool is this paper?  It’s from a withdrawn library book about the ocean.  I lurve it.

It belongs to this growing pile.

Quickly growing pile, that is.

I think these tags would be an awesome part of a book, too,

This whole pile is destined to become… I don’t even want to talk about it…it’s a little silly that I keep pretending that I have plans for all of my collections.  This is not my only pile of old books.  Not even close.

And I have loads more paper.  People say hoarding like it’s a bad thing.  But, I’ve been making books out of found papers.  Don’t you think that should make a dent in my various piles?

If I’m being totally honest, it’s more likely that making books will motivate me to add to the collection.  I know myself well enough to accept that.  …my precious…

I totally forgot to show off my linen quilt now that it’s finished!  Every inch of fabric is linen.  It feel amazing and super soft and light as a feather.

The blue fabric was all dyed with indigo.  It’s from our first couple of times dyeing and we have learned a ton since then.  So it’s splotchy and much lighter than the stuff we dye now.  Still love it, though.

The back is all from skirts and shirts and thrifted clothing.  I love it so much, it could easily be the front of a quilt I would be proud of.

Here are a few detail pictures.  This is my first tie dyed experiment.  It started as a lavender skirt panel.  Because we use thiox, a dye remover, in our dye vats it has some white to it, too.

I did get a titch carried away on the edging as usual.  This is my favorite bit.  I love this combination of colors.

This is some of the cool piecing that improvisation quilting can leave you with.  It’s why I love it so much.  It’s interesting and surprising.  Even the worst mistake you can make looks pretty dang awesome.

On Saturday (November 9th, 2013 for future reference) it’s going to be hung up as part of the Modern Quilt Guild Show at the Sequoya Branch Library in Madison.  I’m going to hang another quilt there too, if there’s room.  I’m just not sure which one.

I have fallen down the rabbit hole of binding books!  I love it and want only to make books!

I recently (last night) gifted two books to friends as part of that Handmade 2013 Challenge that was floating around on Facebook.  I used an old book cover…

…and I bound it using a Coptic stitch.  I love the Coptic stitch because not only is it pretty, but it allows the book to lie flat when it’s open.

And I used found papers.  It totally, as one of my friends pointed out to me last night, justifies my hoarding tendencies because I had so many to choose from.  No, the book isn’t upside down here, Pinocchio’s picture is.

I added a wine bag to act as a pocket on one page and a pull out on the other.  These books are great for taking notes or doodling pictures.

Their variety is intended to be inspiring for either pursuit.

Here’s the other book.  I used Bingo cards as covers.

This pretty paper that was really hard not to rip when I was binding the book.  I don’t know if I’ll use it again.

The pages I made from old books are mostly from books that were bound for the recycling bin, so I like to think I gave them one last gasp of life.

The folded page is a little tuck in pocket.  I just folded over the paper and taped it at the bottom.

I’ve given myself a “One Book a Day” goal since I’ll be teaching this as a class in January.  It’s an easy goal to reach because they are so satisfying to make.  I’ll stop, I guess, when I feel like I’ve got it down.  Or I run out of paper – Hahahahahaha…never gonna happen.