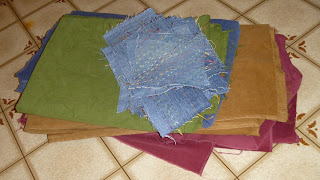 …here’s where I am with the latest quilt.  I went back and forth to JoAnn’s several times.  Man, they can be so annoying.  I settled on this thin wale corduroy.  It’s soft but thick enough to stand it’s own with the denim.  Also I love the colors.   Very fall. 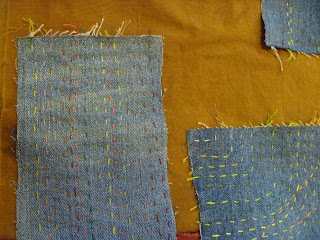 So now to decide what to use where. 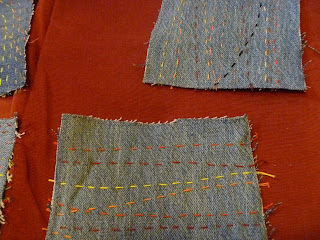 I really thought that the red would be the background for sure.  I bought the most of it; I could easily use it for the back of the quilt. 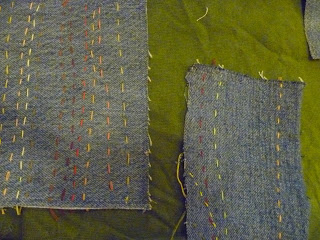 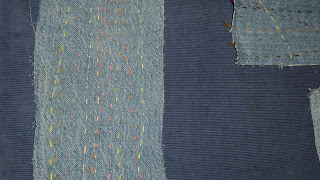 Definitely not the blue. 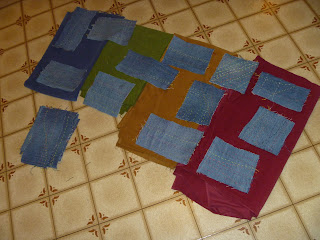 I may even cut squares and just make the whole top of the quilt patchwork-y.  It looks sort of funky and ’70’s to me.  But I don’t want to lost the impact of the embroidery.  So I’m gonna cogitate for a bit on this. 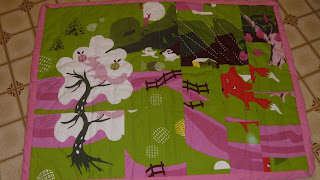 In the meantime, I’ve almost finished the baby quilt I’m making for one of my husband’s co-workers.  I used a remnant from IKEA.  It was a panel and a half of a little scene so I put them together in a way that looks sort of cubist-ish.  I hope it doesn’t freak the baby out to have a chopped up fox on a blanket. 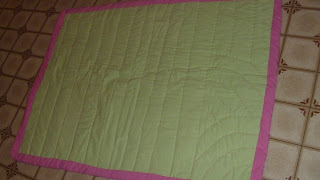 I quilted it using a running stitch with different pinks.  I got bored at the end and changed them up a little bit.  I just have to finish the mitered corners and it’s done.
I took the pictures in my kitchen in order to get the best light.  Have you ever seen such an ugly floor?  We hope to replace it in the next year or so.