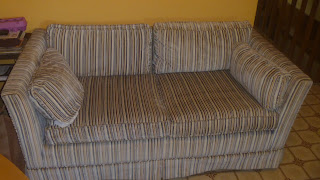 We have a couch in our kitchen in the place of a kitchen table.  It’s the most popular seat in the house. I usually just buy the cheapest and cleanest love seat I can thrift because they are fairly disposable.  We do eat on them after all. 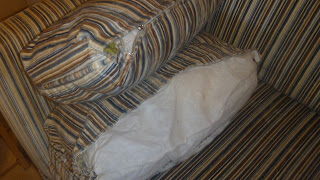 This one is pretty comfy but the throw pillows were very poorly sewn together and have been falling apart, so I decided to recover them. 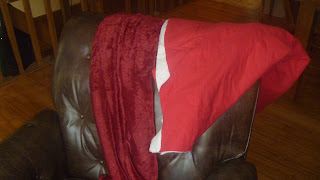 I thought it would be so smart to re-use the baby quilt backing that I had unsewn and some nice, soft, red stretch velvet that I had on hand. Thinking myself clever should have been my first warning. 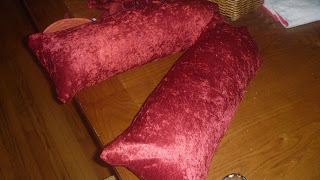 I don’t know what I did wrong.  I measured really carefully but they ended up being way too small.  Getting those pillow forms in there was quite an impressive but ultimately pointless feat. 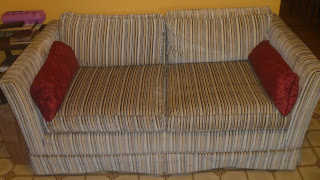 Sausages.
So, I took them apart again and used some of the denim squares that were sitting and waiting for me to think about them again. True to form, I overcompensated in the other direction and now they are really loose.  I think I’ll need to unseam them on one side and wrap the pillow forms with quilt batting and sew them up again.  How clever!  They’ll be perfect!  WARNING WARNING!!
I had better keep it cool.

1 thought on “Keep It Cool”