It doesn’t look that different, does it?  But I did spend a fair amount of my yesterday making this second curtain panel the right size for my window.  I expanded it along two sides so that it would fit my kitchen window.  Now I just need to figure out how to mount it.  I need to be able to open it.  I have a pretty good idea, I’ve done this before.  I need to buy some dowel rods and rings so I’m at a stopping point for now. 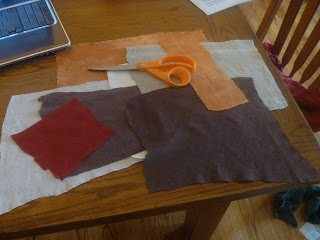 There is something so satisfying about freshly ironed linen.  It can really stand up to a super hot, super steamy iron.  That kind of ironing brings out the best in linen – though when I wear linen clothes, I just embrace the wrinkles.  It’s one of my favorite fabrics. 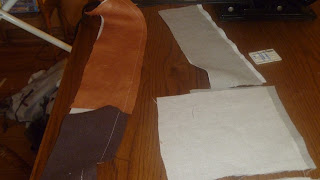 I sewed the two squares together in a long chain to preserve thread but also to be more efficient with my time.  It still took me hours and hours.
Fun hours but still…hours.
That’s right.  My before on this quilt is the exact same as my after.  I still can’t commit to the background fabric for this quilt.  I did lay them out a couple of times to see that they may end up looking like.  I sometimes think that I’d like a quilt made only of the corduroy.   PS – Check out the stuffed animal on the couch.  I made her out of an old wool coat about a year ago. 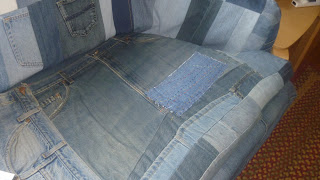 I did steal away one square to patch a worn spot on the sofa.
Apparently, denim wears out whether the ass is inside or outside of the pants. 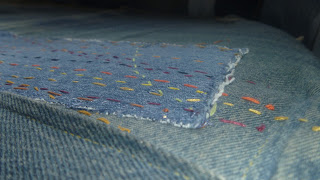 I picked the patch I did because it just had a few lines of embroidery.  That way I could add some more while attaching it to the cushion.  I extended some lines beyond the edge of the patch just for fun.
I also used some thread made just for sewing denim – it ends up being relatively invisible – around the edges in the hopes that it stays on well.  I’m tempted to add some fray check around the edges just to be safe.
We do get a lot of asses on this spot.