I’ve been partaking in some transitional crafting.  The last time I finished a big project I felt down for little while.  So, this time I decided that knitting would be the perfect in between thing to do.  It’s doesn’t take a ton of concentration – especially when using someone else’s pattern – and it’s fun to do.  And it worked.  I’m making the Darkside Cowl out of Noro Retro that I impulsively bought at a Sow’s Ear knit night.  Phew – lots of name dropping there. It’s a very fun knit and I’m sure it’ll get lots of wear.
On to destruction: 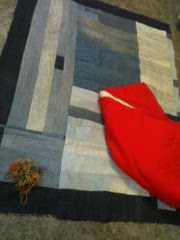 That’s right.  I took the unfinished half of a baby quilt that I had left over and unquilted it.  I was never in love with it and I realized why the other night.  It’s the colors. 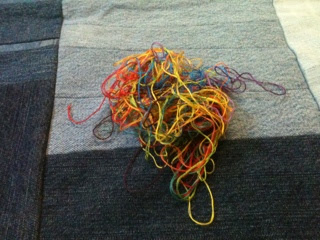 They are great for a baby quilt but these denim blocks don’t really want to be a colorful baby quilt.  They’re too regular and tidy (relatively, for me).

They want a neutral color thread.  Can you hear them asking?  I can.  I will need to remove the border and separate at least some of the squares but I think it’s for the best. 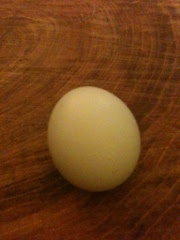 In unrelated news, one of my chickens laid her first egg.  🙂