During October I participated in the Habitat for Humanity Restore Art Auction. 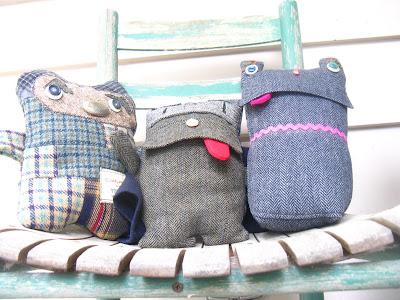 I donated 3 stuffed animals,  and, at the last second, I included bio’s for them.
The auction went pretty well.  It was fun to have my work in an art opening and it felt good to support the Habitat for Humanity.   The only bummer was that they forgot to include the bio’s.  Two of the three Woollies were sold.  I was a little disappointed that the bio’s weren’t included because I think they would have helped to sell them for a little more.
So I thought I’d post them here because it was so much fun to put together and there really isn’t anywhere else to share them:
Salvaged for these little dudes:
10 Wool Coats
2 Wool skirts
8 Vintage buttons (From school assignments circa 1941 & 1959)
Each Woollie is stuffed with 100% wool stuffing to keep away dust mites (They hate wool).

1 thought on “Way Back Machine”