It’s yet another Jennifer! (Not me obviously, there are plenty of us around)  Jennifer Gail from the blog Hoodies and Flip Flops.  You should go over there and check out her yo-yos, they’re fabulous.
It was so fun to have everyone visit and I’ve decided to have another give away.  I’ll post it here tomorrow.  It’s another hand made thing; this one is made out of bark cloth.  (eyebrows waggling).
That just leaves this baby quilt to finish today.  Well, I shouldn’t say it like the baby quilt is all that’s left for me to do.  I have, like, 20 things underway, but, you know, this is what I need to finish next…anyway… 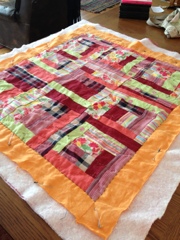 I’ve decided to try an exciting new and kinda nerve-wracking way to bind it.
I made a line of dark green stitches around the border.  But I think it’s still a little boring on the border. 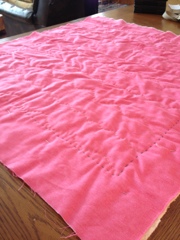 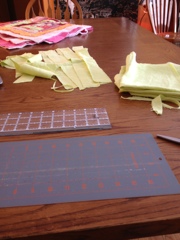 I made the binding by cutting up a light green linen shirt into two inch wide strips and then sewing the strips into one long continuous strip.
When I was visiting family in Phoenix, my cousin showed me how she binds quilts and it looks so much better than my way so I just had to try it.  Here’s where the drama really starts. 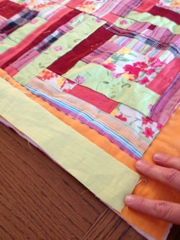 Here’s how I normally attach my binding.  I just machine sew it flat on one side with the right sides facing each other.  Then, I hand sew the other side to the quilt, tucking the raw side of the binding under as I go.  So, no, that actually wasn’t where the drama started but we’re almost there now. 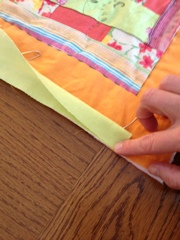 She folds her binding fabric in half before machine sewing.  That way she doesn’t have to tuck it under, it’s already super tidy looking. 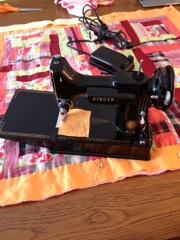 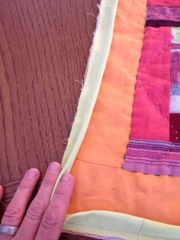 Here it is after I machine stitched it on. 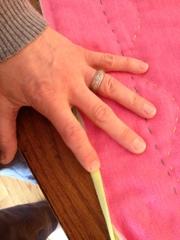 When I flipped it over, though, it’s too narrow.  THERE’s the drama.  Told you it was coming.  I should have made it wider.  So, now it’s nerve wracking.  Now I’m freaking.  I’m just going to try to cut down my seam allowance and see if it’ll all work out.  If it doesn’t work I’ll have to rip the binding out and hope I have enough of the shirt left (pretty sure I don’t) to make a wider binding – gasp!
I’m taking a break before I dive in any deeper.  I need to get the owls to the post office and send them off first.  I gotta tell you, on the possible scale of life dramas, I’m glad mine is down there pretty low.
Down in the solvable quilt binding problem area seems a pretty good place to keep one’s drama.
Remember to come back tomorrow to get in on my next give away!