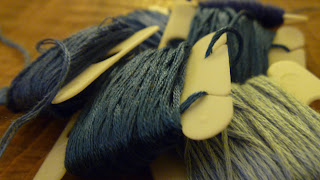 Blue.
That’s the color I picked to quilt this together.  It was my first instinct back when the idea of quilting it with meandering stitches occurred to me. But over time I really started doubting myself and considered about every other color I could think of.  Black like the roads?  White like clouds? The same fall colors I was already using?  Maybe just one of the colors I used?  Nothing seemed quite right.  I was really overthinking it and at an impasse.  Again. 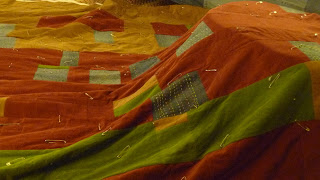 Then I remembered my secret weapon:  I have the most awesome and imaginative friends in the world and I was planning to spend the weekend with them.  So I asked them over the weekend and blue was the second idea I heard.
(The first being to sort of frame each square with stitches which is a really good idea but I had recently done that.)
Oh yeah, that was that first idea…I’m going for it.
I didn’t start it until last night so I only got across the quilt two times but it’s a start. 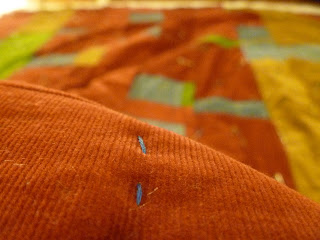 The blue thread really seems to blend in with the blue denim but pop out on the fall colored corduroy and that it was I was hoping for.
I’m really excited to get further along now.
Thank you to my friends!!!!!